Winter and looking ahead. 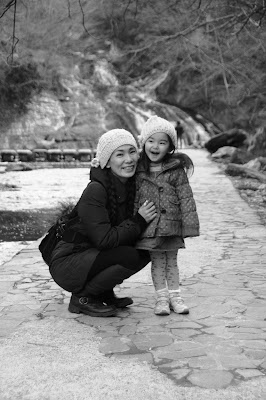 This year's winter is proving to be a little easier than the last. I remember this time 12 months ago & needing a heater close to the desk in order to have mobility of my fingers when typing. Our little boy had recently been born here at home and our garden was taking up lot of time as we removed tree after tree in an effort to gain more space. Now we have a much more spaceous garden and the benefit of what we learnt about growing plants & vegetables in the last year & our little boy is the size of a 2 year old, is nearly walking and beginning to say his first words. So much change in a year! 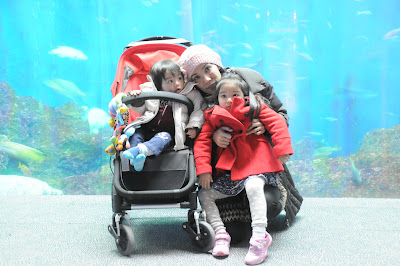 The picture below was taken on a recent Sunday trip to Yoro-Boso. Our daughter happily walked about 3.5km by the river... then we had to resort to games of chasing her & being chased followed by promises of ice cream around the corner... unfortunately the stores were closed when we arrived back to the parking area.... she didn't let us forget the promise & of course we held up our end of the deal. Better than carrying her the last 2km! 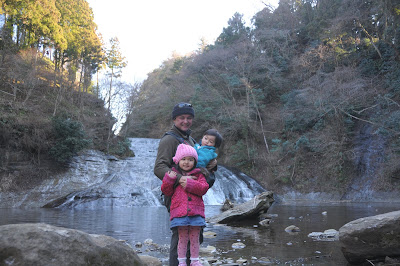 With regard to progress on our garden, winter's the best time to work outside provided the ground's not covered in snow or frozen & Jun has recently cleared the second bushes of Azalea & moved them to the neighbour's land adjacent to our driveway entrance (with permission).
Now our vegetable growing area for direct sunlight has doubled in size and with the old wood shed gone I'm toying with the idea of putting up a small temporary greenhouse so we can sprout vegetables from seeds in time for planting just after the last frost. No photos to show of this cleared land just now, but after there's something of interest to show I'll put up another post.

There are still many ideas I'd like to impliment in the garden before the spring comes. These include cutting down some of the larger trees shielding the sunlight from the garden & house especially the tall Cedar, making trellis to have Kiwi, grapes and rose bushes begin to establish themselves and of course prepare more firewood for next year and possibly beyond. I'd also like to plant some new fruit trees, but as some died after planting in winter last year I'll wait to spring to try again. Would also like to get some chickens so we can have some proper fresh & free range eggs.

Also in the spring I want to repair some of the exterior walls where the white covering has fallen off then re-paint these panels as well as applying creosote to the wooden parts. Slowly the changes are taking place and the house & garden areas continue to improve.

I've also comitted to visit Paul Murray, an old friend in New Zealand during the 2nd week of May for a couple of weeks to do a permaculture design course. Paul & his wife Sanae run www.livinginpeace.com
Around 7 years ago I was charmed enough with Paul's idea to start the living in peace project that I became a shareholder. I had every belief he'd make something great happen and it felt right to support a project that sounded so natural and inspiring. He's come much further than I could have dreamt together with the help of many artists and woofers along the way!
So when I asked him about doing a PDC a few months ago he was most enthusiastic. As a shareholder I wouldn't have to pay for the course nor for lodging, he said- I'd just need to get myself there! I've heard & read great things about this project as well as seeing breathtaking photographs, so it'll be a treat to see the place and experience being there too.
My wife is keen to go too, so we're going to look into costs and if it's affordable - we'll be on the plane together in May and share the adventure of getting to Karamea and perhaps see a little more. Have wanted to go to NZ for a long time so this is something I'm particularly looking forward to.
Not least I hope to learn a lot that we can apply at home for our own project and import some of the insatiable enthusiasm & apetite for progress that Paul seems to have in abundance!

So getting back to the current and not so distant past, we've had some fun recently. Ian, a friend from the U.K. came to visit us for 4 days, so we shared some fun times. It was as good an opportunity as any to take him to the places we miss from when we lived in Shizuoka.

The view of Fuji over lake Yamanaka. 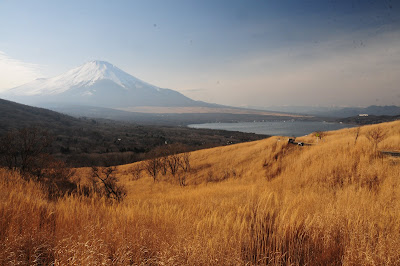 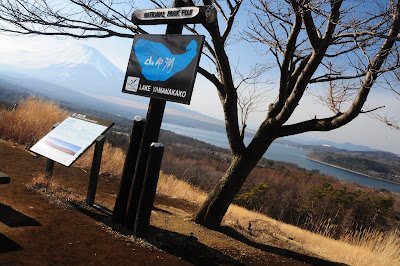 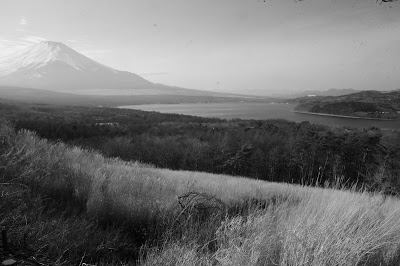 This view of Yamanaka lake was 15 minutes from where we used to live in Shizuoka and this was where we kept our sailing catamaran. It was magical to sail with Fuji so close, although in warmer summer months the mountain would usually be concealed by clouds. 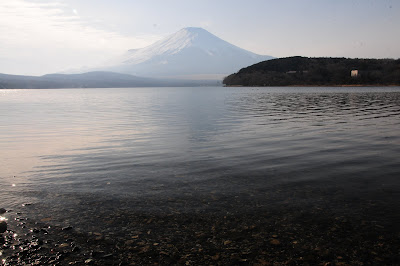 Our daughter's no longer a baby! 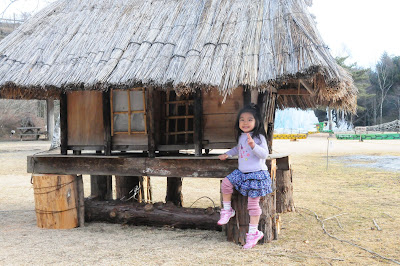 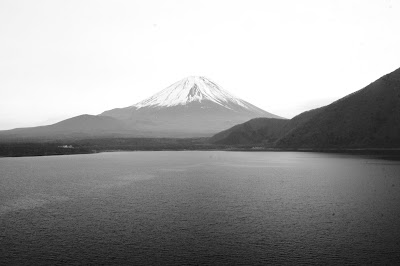 Ian & a 1,000 Yen note. The picture on the reverse side of the note is of the view directly behind him. Not something most tourists get to experience during their first visit to Japan! 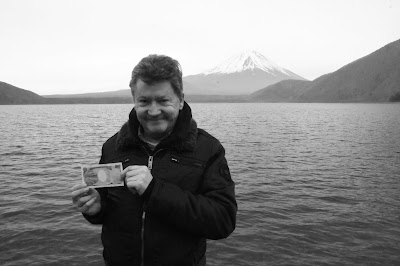 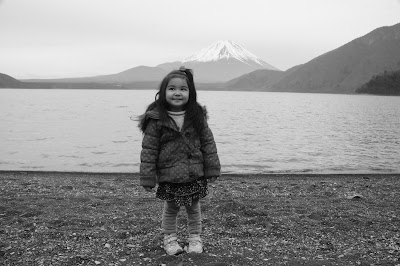 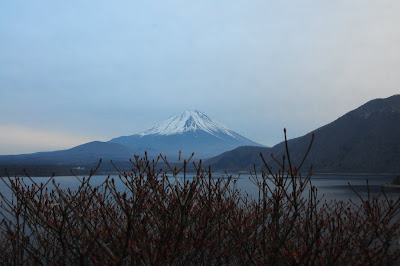 For our son's 1st birthday, we took him to Chiba's Kamogawa Sea world. Interestingly he wasn't as smitten by performing sea mammals as his sister had been at the same age. Both our children are markedly different we're finding. 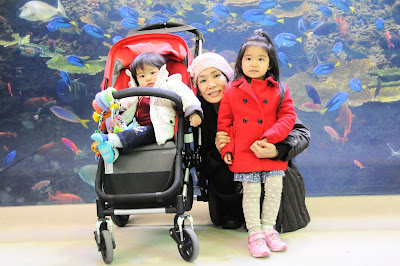 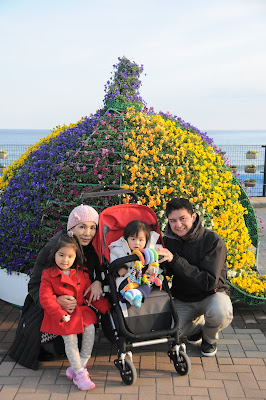 On the 3rd weekend of January we were unable to book our favourite winter guest house so instead we took a day trip to Kusatsu, to enjoy relaxing with friends & introduce them to this cute little country onsen town. Kusatsu has our favourite onsens which we all enjoyed. 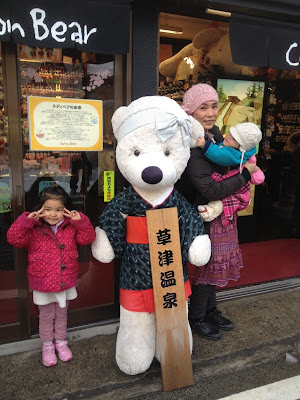 On the stairs leading to a small temple in the centre of town, some locals had made a murial from candles. 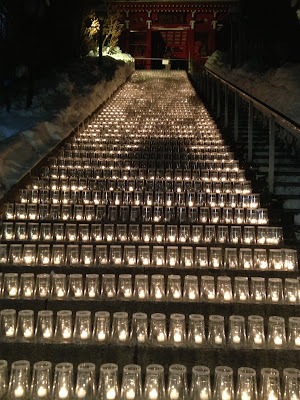 Meanwhile, our daughter's Kindergarten continues to surprise us with the activities they get up to. Recently they had a morning of sausage making... 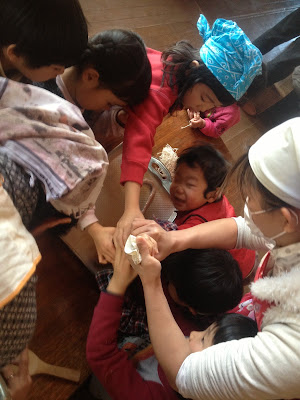 The kids tied up the sausages whilst having to be careful not to split the membraine which is made from sheep's intestines apparently... 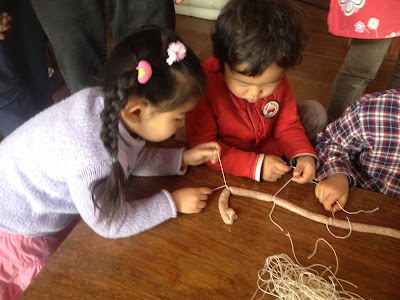 In this Kindergarten the mothers take it in turns to do the cooking each day, so these mamas were busy boiling sausages for about 40 kids and many parents. 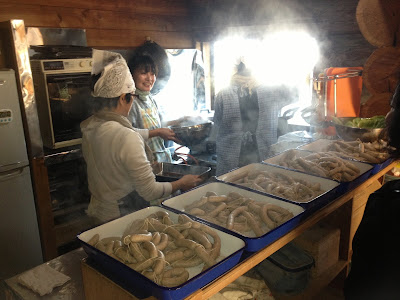 They clearly enjoyed eating what they'd been making. 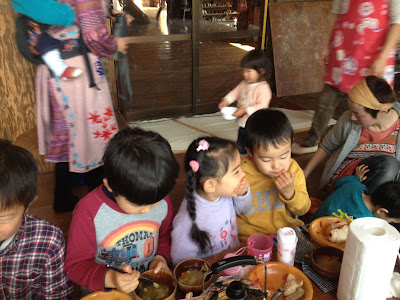 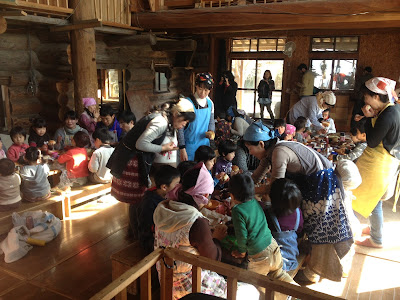 Bread was brought by each parent. These small loaves were baked by ourselves the night before. 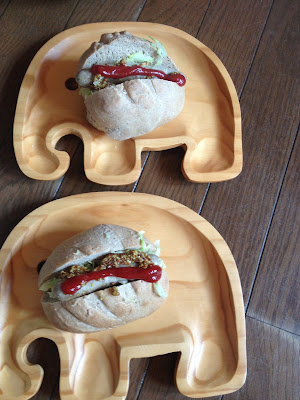