Over the last year or so, I've read books about permaculture, joined the mailing list for the permaculture research institute and watched a few videos.

I had very little idea of what most plants we intended to grow would look like, or how large they might grow, so I set out to plant food with the little knowledge I had gained with the expectation I'd learn as I went along. 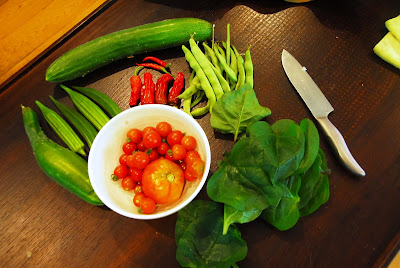 Part of my lunch yesterday

It's now mid August and we've enjoyed both an abundant harvest of food whilst learning lots and also missed out on some where we made mistakes. But through mistakes is how we learn & this gain I hope to apply next year in our continuing path of discovery.

It's been fun to give friends and neighbours generous amounts of vegetables & herbs, by just going outside and picking them fresh, as well as eating them ourselves.
Salads have never tasted better than being freshly picked and eaten. My wife especially liked beetroot, which isn't usually available in Japan. 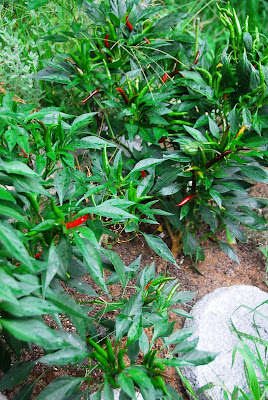 The foods & herbs we've been successful with have been:
Beans, beetroot, tomatoes, lettuce, green peppers, cucumbers, (malabar)-spinach, paprika peppers, chilli peppers, burdock root (Gobo), Italian parsley, basil, rosemary, sweet potato, Okra (Lady's fingers) and carrots. In addition we've had some success with strawberries and raspberries so far and our blueberry bushes have given some sweet results too, albeit small in volume.

Our Asparagus (perennial) is growing, so perhaps next year we'll harvest some. 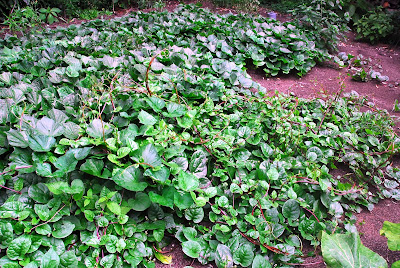 I hadn't realised that perenneal malabar spinach was a vine! It's taken over a patch of the garden beside the house and entwined itself in a rich green tangle of leaves and red stalks. Next year I'll grow it on a trellis which will make a beautiful wall. As it doesn't need direct sunlight, it'll do well I think. Over winter I'll see how it copes with snow & frost too.

What I'd thought would be easiest were potatoes - but we lost our entire crop to rot from the soil being too wet in late spring. We also didn't do well with onions, which was a little disappointing. Our Okra weren't picked early enough and so had a lot of fiber in them, which gets stuck in our teeth and makes for a lot of chewing, so next year we'll pick them earlier!

Not using any pesticides or herbicides at all, our broccoli crop was soon eaten away and small cabbages have also fared similar fates so far. Although we got some pumpkins, they've never turned deep green in colour, so next year we'll have to try and stop the pumpkin plants getting too big and perhaps start them a little earlier too. We only got one small water melon, probably for the same reason of letting the plants grow too large and not concentrating nutrition on the fruits. 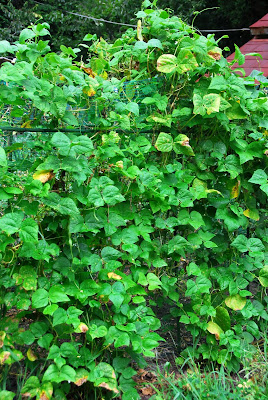 Our beans & cucumpers were grown using netting, but it was too small, so next year we'll use a larger type, but all in all, it's been more successful than I'd envisaged and I feel better prepared to tackle our next planting, for winter crops now and have a much better idea of how to grow food for next year's seasons, although I realise we've still got so much to learn. That's part of the fun.

For those of you interested, here's a video of the author of "The One Straw Revolution", Masanobu Fukuoka who is widely considered to be one of the great pioneers of permaculture.